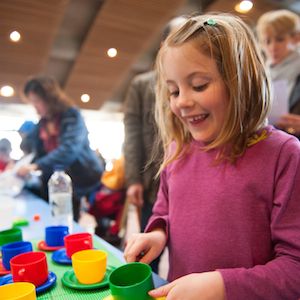 Around 1,200 children and members of the public participated in the maths events we organised as part of the Cambridge Science Festival in March 2014.

The annual Cambridge Science Festival takes place over two weeks in March each year, and is one of the largest public understanding of science festivals in the UK. In 2014 the Festival included more than 250 events in total, attended by an estimated 35,000 people.

Our public talks included Martin Rees, the Astronomer Royal, talking on 'Our Universe and Others' on the evening of Monday 17 March. Much additional excitement was generated by the announcement earlier in the afternoon of the BICEP2 data providing evidence for the inflationary theory of the Universe, which Lord Rees referred to in his lecture. (You can watch the filmed lecture online on Plus, our free online mathematics magazine.) On Saturday 22 March Dr Vicky Neale's public talk explored '7 Things You Need To Know About Prime Numbers'. Both talks were aimed at adults and attracted capacity audiences in a packed lecture theatre.

The previous week, on Tuesday 11 and Thursday 13 March, we ran two afternoon workshops for secondary schools. 250 students aged 11-13 and 14-15 from 16 different schools joined Charlie Gilderdale from our NRICH project to work on extended problem-solving activities around the themes of 'Thinking Mathematically' and 'Convincing Yourself, Convincing Others'.

Finally, on Saturday 22 March we welcomed hundreds of children with their parents and guardians to the Centre for Mathematical Sciences for our Hands-On Maths Fair. Families were welcome to drop in throughout the day - with many visitors staying for several hours - to explore a huge range of mathematical activities, with a special focus on encouraging creative mathematical thinking and reasoning and exploring mathematical patterns. This year some of the hands-on activities were actually feet-on: one very popular activity was based on the famous Bridges of Königsberg problem, with cut-up yoga mats providing the bridges. You can read more about the maths behind this problem and how we turned it into a practical activity on Plus, and see photos from the Hands-On Maths Fair and the '7 Things You Need To Know About Prime Numbers' talk on the University of Cambridge's Flickr photostream.

Although the 2014 Cambridge Science Festival is now over, we also organise other mathematical events for schools and the public throughout the year. Information on future events is updated regularly on our Events page, and to receive advance notifications of future events you can also subscribe to the MMP events email list and follow us on Twitter.