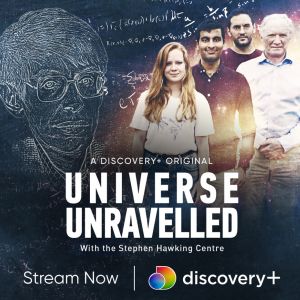 For the past 18 months Plus has been working with the Stephen Hawking Centre for Theoretical Cosmology on a major new Discovery Channel short documentary series.

The Universe Unravelled series premiered on Discovery+ in November 2020, coinciding with the UK launch of this new digital platform. It's aimed at anyone who is curious about the Universe we live in, with no previous knowledge of cosmology required. In over 20 short episodes the series explores what we already know about the Universe, what cosmologists are working on right now, and what they hope to find out in the future.

The series features 17 research staff and students from the Centre for Theoretical Cosmology (CTC) - founded by Stephen Hawking - in the University of Cambridge's Department of Applied Mathematics and Theoretical Physics, together with members of the Kavli Institute of Cosmology, Cambridge. It offers a glimpse of what it's like to work at the cutting edge of cosmology: confronting sophisticated mathematics with observational data, employing some of the world's fastest supercomputers, and even daring to challenge Einstein's highly successful theory in an attempt to explain what has so far defied explanation. Viewers not only learn about the deepest secrets of our Universe, but also find out about the everyday life of students and staff at a world-leading research centre.

Plus has been involved since the beginning of discussions about the series, brought on board by the CTC to support and lend expertise in facilitating this major public engagement project. Taking on the role of Science Editors, the Plus editorial team collated input from all the researchers involved to produce an initial brief, introduced and explained the science to the production team, contributed to the script, and managed the project on the Cambridge side. During filming, Plus editor Rachel Thomas (off-camera!) also led the interviews with each contributor which appear in the series episodes.

The collaboration was very successful for all involved. Our involvement reflected Plus' remit not only to reach out to engage, educate and inform as wide an audience as possible about the excitement of mathematics and the mathematical sciences, but also to support researchers to explain what they do to the public.

Read more about the series and the scientific topics covered, with an insight behind the scenes, in this Plus article.

The series itself is currently available on the Discovery+ digital service, which can be found here.